Dr. Aucamp is a General Dentist at Battlefords Dental Centre in North Battleford. 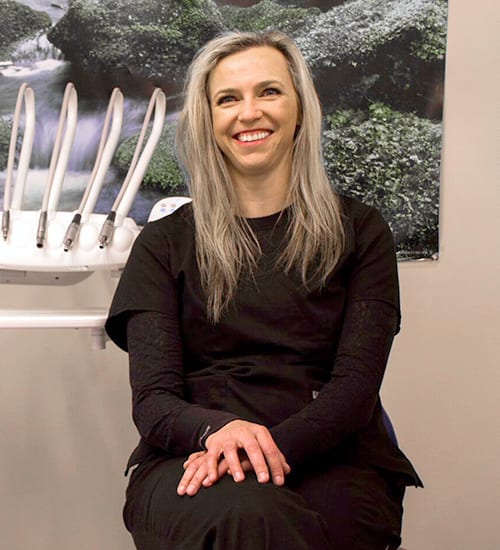 Dr. Juanita Aucamp graduated from high school in Windhoek Namibia in 1993 and qualified as a dentist from the University of Stellenbosch in South Africa in July of 2000. She did a year of community service for the South African government until July of 2001. She then worked for the big mining company, Anglo America, in South Africa for about 6 months before moving into private practice.

She began first as an independent contractor and later as an owner for 7 years of her private practice in South Africa. During this time, she received a post graduate diploma in Clinical Dentistry and Implant Dentistry from the University of Western Cape in South Africa.

She moved to Canada in 2009. She took a break from dentistry for a few years while adjusting to her new life here and preparing for her Canadian Dental Board Exams. She became a Canadian Board Certified Dentist at the end of 2013. In 2013, Dr. Aucamp welcomed her brother, his wife, niece, and nephew to North Battleford. She is very proud that she obtained her Canadian citizenship in the fall of 2015, and she is very grateful for the community that embraced her and her family.

Looking for a dentist in North Battleford? We're happily accepting new patients at our dental clinic! Contact us to get started.